Alice Eduardo, known as the “Woman of Steel,” as she successfully penetrated the male-dominated construction industry, led the ribbon-cutting ceremony of the newest sporting facility in the National University (NU) Laguna campus. The world-class facility was named after her as the Alice G. Eduardo Tennis & Aquatic Center (AGE TAC). NU president Dr. Hans Sy joined Alice in the said ceremony.

The said ribbon-cutting ceremony was also attended by Alice’s parents, Dr. Andres and Elisa Eduardo, and her sisters, vlogger Small Laude and Melba Solidum. Her children, Jacqueline, Jessica, and Jameson, were also in attendance.

AGE TAC houses an Olympic-sized swimming pool and two tennis courts. It is designed with young Filipino athletes in mind and what they would need to thrive in the sporting world, including a dedicated space where they can focus primarily on training. 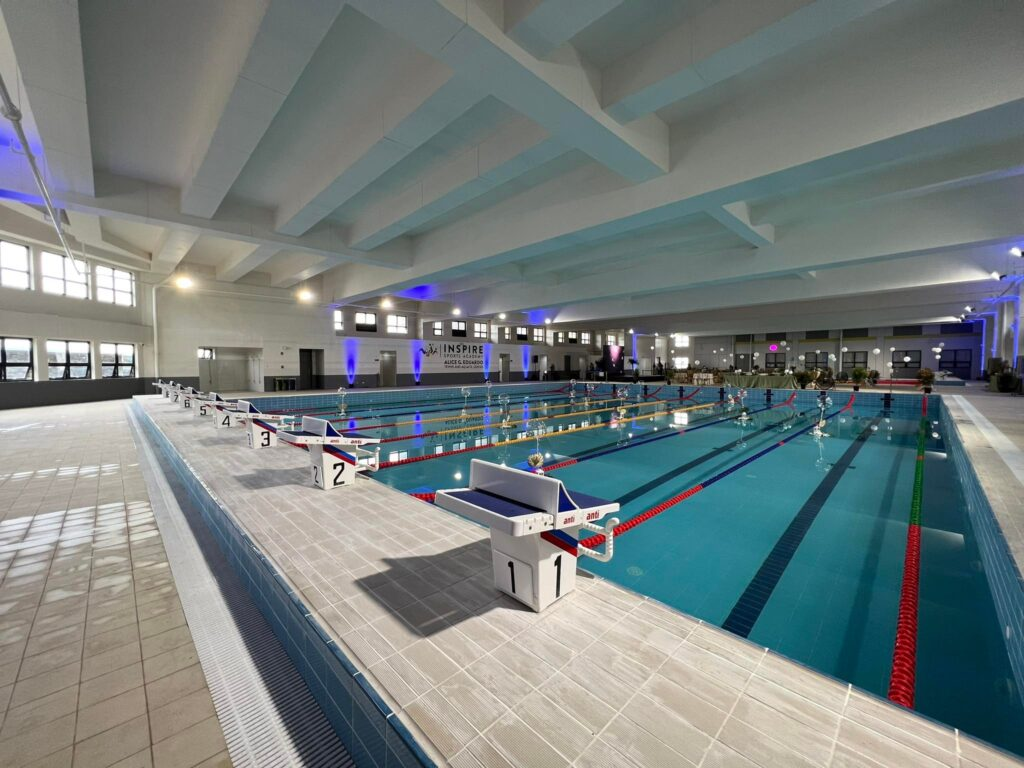 As the founder, president, and CEO of Sta. Elena Construction and Development Corporation, Alice is humbled to be a part of the building of this sporting facility. Alice said, “This center is my commitment in steel and concrete to strengthen the future of our youth by giving them a healthy, meaningful present through sports.” However, she chose not to divulge the amount she poured into the development of AGE TAC.

While Alice is known for her philanthropic works using money from her own pocket, not necessarily from her construction company, AGE TAC is a partnership between NU, Inspire Sports Academy, and Sta. Elena Construction. AGE TAC establishes and elevates the academia’s commitment to sports excellence. Thus, the facility aims to contribute to changing and shaping the future of Philippine sports and Filipino athletes.

The Philippines’ “Woman of Steel” could not be happier. Alice is thankful to Mr. Hans Sy for inviting her to sponsor the sporting facility for NU. She mentions, “Students really have a special place in my heart.”

Sta. Elena Construction is a proud sponsor of a local volleyball team. The team debuted in Philippine Superliga (PSL) as a pioneer team (men’s division). It then joined Shakey’s V-League men’s conference.

A partnership carved in steel

Alice met SM Group’s scion, Hans Sy, through his father, the late Henry Sy Sr. When the SM patriarch decided to turn the reclamation area in Pasay City into SM Mall of Asia (MOA), Sta. Elena Construction bade and won the said project. At that time, Alice’s company was one of the few with the necessary equipment to do foundation construction work. From MOA to other SM malls to SM office buildings and residential complexes, Sta. Elena Construction proved time and again its construction prowess. Alice Eduardo and Hans Sy worked together on some of these projects.

Today, Hans Sy may be known for his massive wealth—being the son of the country’s richest man. However, Hans is fondly called “Superman,” wherein, like Alice Eduardo, he also supports various charitable endeavors. For example, he once helped rescue a baby abandoned in a trash can in one of the SM malls. Hans Sy shouldered the baby’s medical expenses before entrusting him to a local orphanage.

Hans Sy stepped down as SM Prime Holdings president in 2020. Hans Sy is the current chairman of China Banking Corporation and NU. He tapped Alice Eduardo’s help to sponsor the said sporting facility.